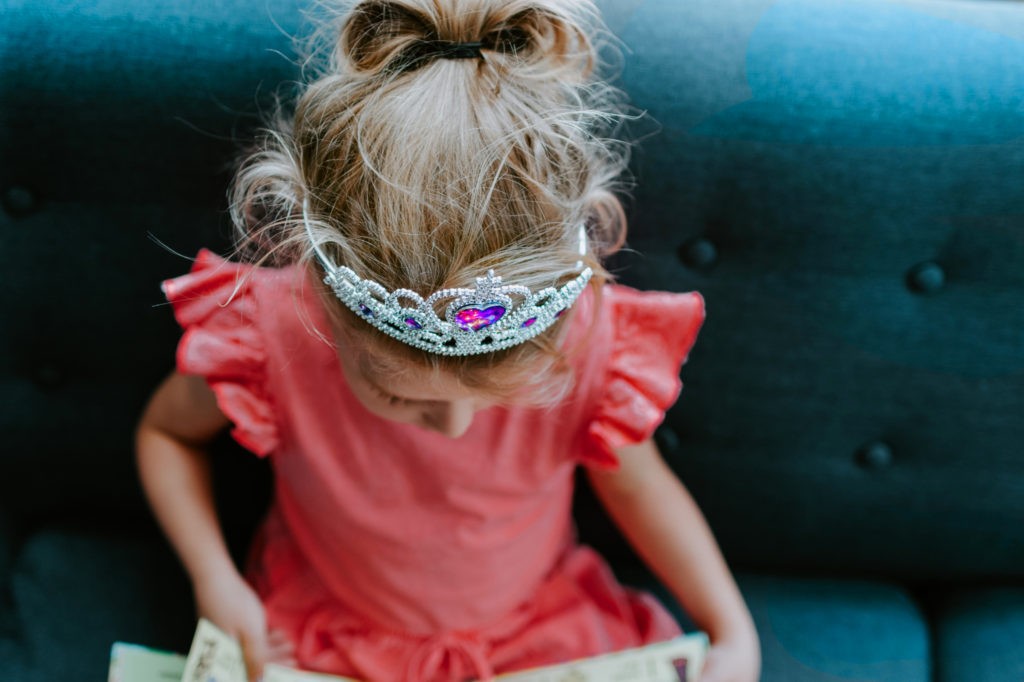 The Queen of New England

In our tiny, rural Québec town, our family has long been considered a bit strange, having moved here from the U.S. in the late ‘90s. We are a bilingual household, speaking both French and English, and this made my three kids unique among their peers at the small elementary school they attended.

One evening, at the dinner table, our eight-year old son began asking me questions about my American mother, his grandmother. Where did she come from, and why did she speak English, he wanted to know.

Now, I am usually a fairly serious person who responds to direct questions truthfully. But on this particular evening – I think it was in the late winter – something came over me. I must have been experiencing the first symptoms of cabin fever, a disease common to Northerners the world over when they have had just about enough of the white stuff and are beginning to feel desperate for the return of Spring.

So I began telling my kids the story of their maternal great-grandmother, a woman who had secretly been a Queen. The story goes something like this :

My grandmother was one of a handful of direct descendents of the British royalty in power at the time the first settlers arrived, by a twist of meteorological fate on the shores of Cape Cod, near what is now Plymouth. While her lineage would have made it unlikely that she would ever have ascended to the throne in Great Britain at the time, her status was an entirely different story in the New World, where governmental structure and positions of power were still to be decided and often handed out as favours. Her royal ancestor, an illegitimate son of King James I, was heir to the fortune the King had bestowed on one of his favourite mistresses, a woman who had eventually married a wealthy merchant and sailed, along with her small child, a little boy, to the New World not long after the pilgrims had established themselves in what was to become Massachusetts.

Not long before the American Revolution, my ancestor, by then a young man, received an unusual visitor to the family home. It was an emissary of the King, disguised as a traveling merchant. The political situation between Britain and the Colonies was becoming treacherous. The King was desperate to get the colonists under control and was beginning to realize just how difficult it was to influence people who lived on a far-off continent and who were too busy trying to survive and unreceptive to the demands (including the exorbitant taxes) imposed by a distant ruler. He was ready to name a new type of governor to the region, a direct descendant who would himself become a King, the King of New England. When the bad blood had begun between the British ruler and his long-distance subjects, my ancestor’s family had wisely chosen to hide their royal affiliation, but the visitor was unaware of this. The family had been initially financed by King James himself and could not risk angering their benefactor. They signed the papers their visitor presented, endowing my ancestor with the title of first King of New England. King James clearly believed that the eventual outcome of the conflict would render this a good decision and that he would have a puppet-king in his pocket when all was said and done. Because the visitor was operating undercover, no fuss was made of the transaction and he went on his merry way without the locals being any wiser.

Despite their original affiliation, my ancestor’s family had spent their years in the New World struggling like all of the other colonists to create a new life. When the bad blood had begun between the British ruler and his long-distance subjects, they had wisely chosen to hide their royal affiliation from their neighbours. As the conflict escalated, my ancestor’s father was killed during one of the many skirmishes that took place in the region. His mother, not yet having any children, was now the Queen of New England. She quickly and quietly remarried to a younger man, a farmer, thus vanishing into an inconspicuous life.

The American Revolution came and went, and the Queen of New England, widowed again when her second husband succumbed to an unknown malady, died a quiet death at the age of seventy-two. Her son, a farmer like his second stepfather, was now a grown man, married himself with three young daughters. While preparing for her funeral, he opened the big chest at the foot of her bed. In it was a roll of parchment sealed with a heavy wax stamp. He gently lifted the seal off with his knife and read the document. What a revelation! While the Revolutionary War was over, the anti-royalty sentiment was not and Great Britain was most certainly not finished with trying to win back the Colonies. He once again sealed and hid the document. When his eldest daughter married at the age of nineteen, he took her aside and told her the story of how he had been given the title of the King of New England, and how this title would make her Queen upon his death.

While the British had, for the moment (so they believed), lost the Colonies, the King (now Charles) continued to send the occasional messenger, always in greatest secrecy, to remind the current King or Queen of New England of the eventual role he or she would play once the unruly Americans, as they now referred to themselves, were back under the royal wing. Caught between a rock and a hard place, my ancestors kept it zipped.

And so the generations carried on, with the traditional visit from the royal messenger occurring upon the death of each succeeding descendant. But it was becoming less and less likely that the British could install anyone on any kind of throne in New England, which was on the way to becoming part of something much bigger – the future United States of America – a place that was to be founded on the principles of democracy and full of disdain for anything resembling a monarchy.

My maternal grandmother was born in 1892 and eventually came to know that she was – at least on paper – a princess. Her mother, the current Queen of New England, taught her not to speak of the situation and kept the ancient, official documents under lock and key. Despite the unlikelihood of becoming an acting Queen of anything, my grandmother was nonetheless educated to lead – she studied music and pursued a successful career as an opera singer until her marriage to my grandfather in the late 1920s. It was the height of the Women’s Suffrage era and my grandmother was always ahead of her time. Her husband, a chemistry professor, bought a small chemical company and set her up as manager.

When her mother finally died, and she became the theoretical Queen of New England herself, she received what would be the final British visit, this time from an actual member of the royal family (who shall remain unnamed). But this visit was different. A British sub-monarchy in the U.S. was clearly impossible by now, so this thoroughly modern heir to the imaginary New England throne was offered a modest sum of money to sign away her right to rule. She may have been tiny, but she sent him packing in a big way. She’d be damned if she was giving up the right to anything, however slim the chance! Why, hadn’t she recently fought for her right to vote (and won)? She was a woman ahead of her time, even if she was technically past the sell-by date for ascendance to the throne.

When her daughter – my mother – was born, my grandmother treated her like the princess she was, dressing her in the latest styles, giving her a good education and preparing her for life as a future (secret) Queen. What she couldn’t do, though, was count on my mother to go along with the plan. My mother is, in fact, famous for not going along with anybody’s plan. Oh, she loved beautifully designe clothes, enjoyed the more social aspects of school, had great manners and lots of high-energy charm and was very popular with her peers, but she was primarily interested in being free. She wanted to travel the world, meet people – she wanted to live, in other words. Even if her title was unknown to the world, it was a weight she didn’t need. So when her parents paid for a summer trip to Europe after her sophomore year at college (a common practice at the time), they didn’t know that via connections made at the Canadian university she was attending, she had managed to wrangle an appointment with the Secretary to the Queen of England in order to settle the matter once and for all. I won’t go into all the details, but rumor has it that the Queen herself showed up to the meeting and they chatted briefly about the unusual arrangement over tea and scones. My mother had brought along the old, crumbling documents which the Queen looked over carefully. Together they signed a new document stating that nobody from my family could ever again lay claim to the title of Queen (or King) of New England nor partake of any previously promised benefits that might go along with said title. The old documents were returned to my mother as a keepsake and remained in an ancient steamer trunk in the cluttered attic of the Colonial-era house I grew up in.

After my kids became interested in the story, I asked my mother about the documents, curious to see them myself. She told me that unfortunately, over the years, perhaps during the move to where my parents now reside, they seem to have vanished into thin air.