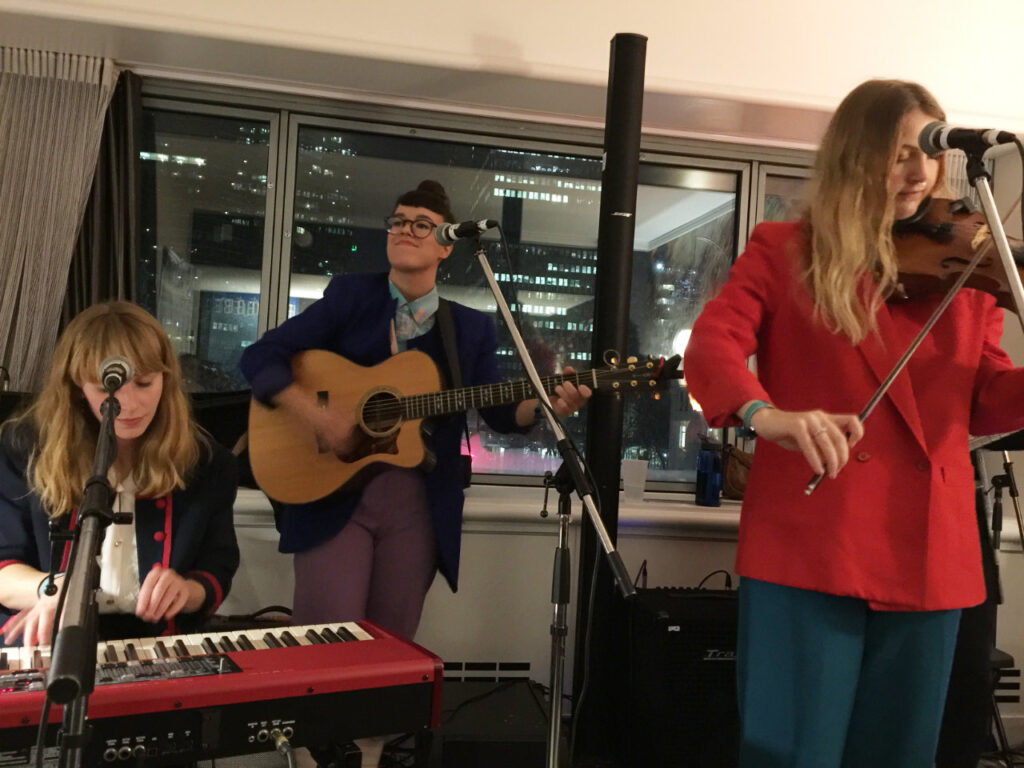 If you are a performing artist, you have to constantly prove your very existence – especially during a pandemic. Here’s how I am changing my approach to sharing creative content online. 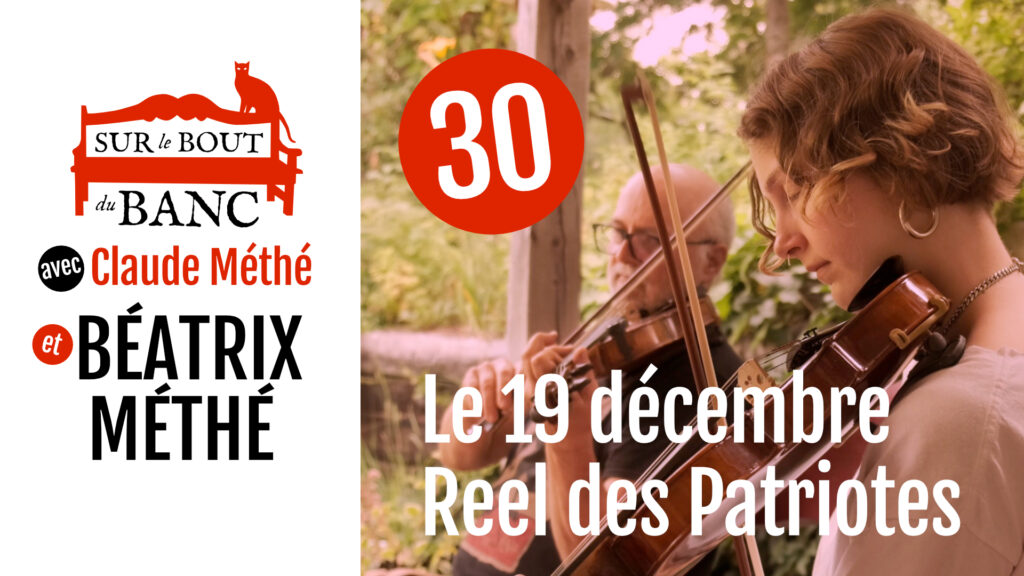 I am a musician and visual artist who produces a weekly music video about traditional music. Sur le Bout du Banc (on the end of the bench) is a series featuring veteran Québec fiddler Claude Méthé and guests who share the bench with him for a tune or three.

As artists living in a world where it is increasingly difficult to make a reasonable living, we need to conserve our time and energy for creative activities that will bear fruit and satisfy our artistic drive. Sur le Bout du Banc was born when – after spending thousands of dollars to promote ourselves and to perform (for no pay) at a major international music industry event – a year’s worth of contracts was abruptly postponed and then cancelled. Meanwhile, local gigs and our weekly traditional jams were off-limits and for the better part of two years, even playing with friends became impossible due to provincial health restrictions.

To add insult to injury, the new, virtual world of gigging has meant that not only do we perform for audiences, but we must prepare and practice the entire technical setup in our home prior to going live, and one of us (guess who) has to deal with the mics, keyboard, mouse, and Zoom settings while delivering a show (and pray the power/wifi doesn’t crap out mid-concert – yeah, it has).

We are paying to play

We create, we practice, we perform, we record, and (some of) you want to listen to our music. You used to buy CDs, and if we didn’t have a label taking a cut, we’d make a small profit after paying the production cost. Now, you pay somebody else for a subscription that lets you listen to us any time you like, and when you do we make a fraction of a fraction of a percentage for each play – $0.01 cents per stream (Apple), $0.00331-0.00437 (Spotify). This won’t even pay our gas to get home from the gig. We sell digital downloads on our own website (or on a big platform, like Bandcamp or CDBaby) but it’s easier for you to stream us (and there are so many artists to choose from, sometimes you don’t remember that we exist).

For years, at music industry events near and far, after paying the associated expenses – conference fees, memberships, airfare, hotel, food, promotional material – my band has had to perform for free in order to convince presenters to hire us for their festival or concert space. This used to be something you might do once a year, and maybe even have a bit of fun doing it, seeing other artists, networking. But over the past two decades, it has become nearly the only way to get a gig. Gone are the days of presenters simply talking to your agent or manager (which might be you), watching a video, reading your press clippings, listening to your album… or getting a reference from another presenter or musician whose opinion they respect. Festivals now have application forms on their websites and sternly remind you not to send a CD or presskit or you’ll be disqualified from consideration. Sometimes presenters are subsidized to attend industry events, receiving grant money, conference fees, hotel room, per diem, airfare etc. In my personal experience, the artist is almost always the last one to be paid. I am lucky to live in Canada, where federal and provincial governments offer some support to artists and presenters. 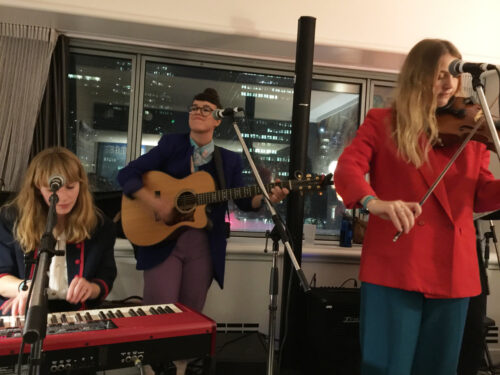 As you can see, we are basically partaking in a never-ending “showcase”. Not only are we performing on our own dime, but now we are sharing our painstaking, professional, time-consumingly created work to platforms that make money from our presence and in the case of Facebook, don’t share any of it (unless you are a top-tier artist). It just feels like more of the pay-to-play approach that for me has become the final straw.

For all artists, when you are not appearing on concert stages, you have to prove – daily – that you still exist. The adage “out of sight, out of mind” applies perfectly to us. So when the pandemic decided to stick around, I began filming, and my subject Claude invited guests to join him whenever it was possible with the health restrictions currently in effect. I invested in new gear (another camera, a portable audio interface, etc.) and spent many, many hours learning and perfecting my skills as a videographer (an ongoing process). I believe you could describe my new approach as “pivoting” to adapt to the current scenario, although some might prefer the lemons/lemonade analogy.

For those who don’t know what is involved in creating a video series, it’s not as easy as it might seem, even for a 3-5 minute production. First of all, the performer needs to practice, practice, practice. Daily. The producer needs to create the set, plan the shoot, configure cameras (3), audio (an external interface and mic), and run the whole setup from a computer (a laptop in my case). Once the performer has done their job, the whole thing has to come apart, the video footage has to be transferred to a hard drive and carefully identified, and the audio take(s) have to be prepared for mastering. Then it’s on to the video montage and audio mastering using the tools of your choice (Final Cut and Logic). Not to mention creating custom motion graphics for the intro and outro of each episode, the weekly poster frame (what you see on YouTube channel before clicking to watch), the content description, credits and tags, and of course, the whole process again for the 30-second Facebook teaser video. There is the uploading to each platform, and then each episode must also be posted to the artist’s own website. Basically, with a lot of practice under your belt, it is a day’s work.

I am not sure that many Facebook users are aware that when an artist directly posts a video there, it automatically gets exposure to your personal followers and/or business page, but if you post a link to the same video hosted on another platform (i.e. YouTube), the mysterious and elusive algorithm suppresses that post on your Facebook page (presumably because it is feeding the competition). This means that every week, I had to upload the same video and add the appropriate details (title, description, poster frame, tags, links, etc.) multiple times. It was a lot of work, a lot of bandwidth on my somewhat limited, rural connection, and a lot of time. And for what, exactly?

While the result of publishing the series has been positive, we have yet pay any bills with it. A strong YouTube following is currently one of the few feasible ways to develop a small income stream for this type of work. As for Facebook, the only reason for artists like us to be there is our fans and the hope that some presenter, somewhere, will notice that we haven’t yet kicked the bucket. Prior to posting full videos only to YouTube, when I looked at the analytics, I saw that while we’d get decent viewing numbers, most were for mere seconds of each 3-4 minute video. And there is no direct financial gain that is traceable to these views. The only impact has been that maybe – just maybe – some online CD and download sales from existing “friends” who had suddenly noticed us. The stats were already very different on YouTube – people watched the whole video and the (still very small) subscriber numbers were steadily growing, although not yet to the point for monetization in the form of ad revenue. I could directly trace some music sales to individuals who subscribed and/or commented on these videos. And while it is still fairly new, YouTube does offer paid subscriptions that could potentially increase exposure.

One important thing I did on Facebook when I began posting only the teaser was to say that it was only 30 seconds long. And I outright asked people to subscribe to the YouTube channel – and told them why. And many did.

If we are serious about our art, even if we consider performing the true expression of what we create, we have no choice but to maintain a social media presence and to distribute our digital content on streaming services.

If you are serious about supporting artists – before, during or after a pandemic, the very best way to do this is to subscribe to their channel, page or e-newsletter; to buy their music (directly from them if possible, even if you can listen on your streaming subscription) and to share their creative announcements so that their public continues to grow, even if their contracts are currently touch and go.

You can also find me on claudemethe.com and the aforementioned series on youtube.com/tradmedia.